After two months of training on the box office system, writing articles for the game day program, fielding phone calls for tickets for the 2012 season, working high school and college tournaments – finally – tonight is Opening Day for the team I work for, the Detroit Tigers’ Class-A affiliate, the Connecticut Tigers!

I’ve attended many, many opening days over the years, however never from a behind the scenes standpoint. The red, white and blue bunting, the on-field presentations and the excitement of taking my seat at the first game of the season has always been part of the excitement, year in and year out. This year, however, I won’t be sitting in a seat. I’ve been organizing who will be sitting where in which seats through our 6,000 seat stadium. 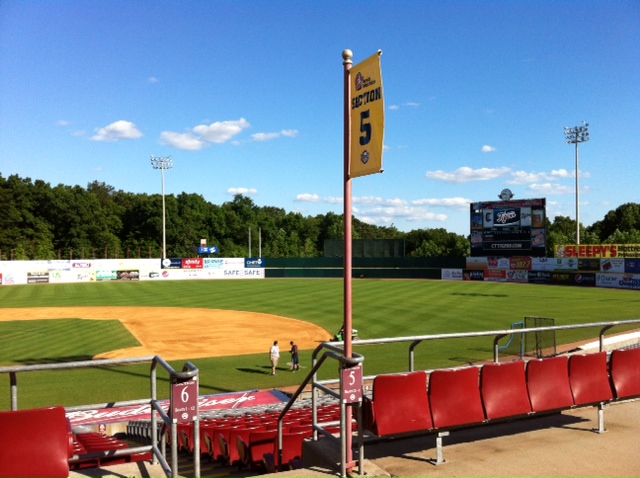 It is seven hours before game time and the staff is working hard, wrapping up the last bit of things that need to be done before Tigers fans show up to the ballpark. The team is returning from the road having split the two games Monday and Tuesday night at Lowell (the Spinners, the Red Sox A affiliate). Tonight Lowell returns the favor of playing ‘opponent’ for the Tigers at Dodd and there should be a great amount of Red Sox fans who reside in Connecticut not quite sure of which team to pull for. The stadium should be packed as it’s Opening Night and we have fireworks immediately following the game.

Here are a few photos from the past couple months of working here that I can share with you:

This one is of my office, the box office. All ticket sales magic goes on in here. The place is filled with ticket stock, printers, schedules, rosters, pocket schedules, team news, will call ‘to pick up’ tickets, old mascot heads and other goodies. I jump out of here whenever I can to grab a hot dog or nachos and catch some of the action but a lot of the time I’m at my desk running the money side of things or writing future articles. I’ve had a chance to conduct interviews with players and write about the New York-Penn League. The game programs arrived this morning and they look great! Here is one of my articles included inside:

When I toured the stadium in my first meeting with the ballclub, this view below, was one of my favorite. The time between the locker – the getting ready point – and the field – the time to perform part – must be one of the best in sports. Last minute inside jokes exchanged with teammates. Getting your head right for the big game. Settling your nerves before you step in front of thousands. This stretch is the last opportunity to get your head right before heading out to the field and playing for the fans. This shot here is of the tunnel from the visitor’s clubhouse to the visiting team’s dugout. Gotta love the sound of cleats walking through a tunnel, no? 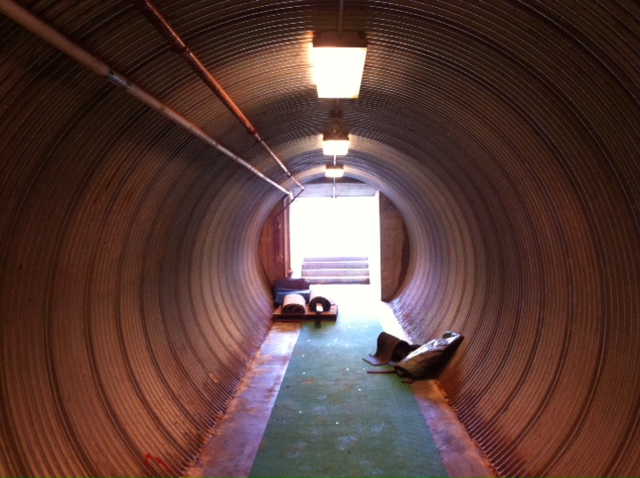 The home fans that have their season tickets and their ticket plans and those that have been keeping the box office phone ringing off the hook yesterday, Tuesday and today are really excited for the season to start. You think it’s hard waiting for your team to start up again in April? Try waiting for the team to start up again in June. I’ve been receiving emails from dedicated Connecticut Tigers fans with ‘Go Tigers’ messages and the place is excited about the opener and fireworks for this evening.

Since our players are mostly draft picks out of college, from nowhere near Norwich, CT, they need places to stay. Some of the CT Tigers’ more devoted fans have stepped up and offered to serve as host families for the season. Some of them are taking one player, some more than one and all of them will be doing our team and players a huge favor by doing so! (Yes, they are compensated with season tickets, but still…a huge help to our team and players!) Here is a shot from our host family/season ticket holder BBQ the other night where everyone got a chance to say hello before the season kicked off:

When the players aren’t staying at their host families’ homes, they are going to be at Dodd Stadium or on the road representing Detroit’s A-ball farm team. Playing at Dodd Stadium is a treat for these guys as the stadium was actually built in 1995 for a AA team, a couple levels ahead of where our short-season A-ball club is on the road to the Show. So the stadium is bigger, the amenities are nicer and overall, the experience playing here is greater compared to a lot of the teams they will be facing this season. Here is a shot of the home clubhouse. When I saw it for the first time my first thought was ‘Moneyball’ and that the set dressers on that film did an amazing job. I could picture Brad Pitt taking a bat and making a statement in the middle of the locker room as it looked just like the type depicted on film.

It was very cool to meet the players. They are here on their first step to becoming major league ballplayers. The front office had a chance to meet the players a couple days ago in the clubhouse. The players were assigned jersey numbers and lockers that day so they were all sitting around the clubhouse in front of their lockers with Detroit Tigers work out gear on and Connecticut Tigers hats on, ready to go. Their jerseys were hung in the lockers, the cleats placed on top of the lockers and the manager, Andrew Graham and the rest of the staff were around to introduce them to our General Manager, myself and the rest of the front office. These kids are here to make a statement and stay in short-season A-ball for as little time as possible and then – on to the next one. They mostly all serve a complete season in short season A-ball and then if the organization feels they are ready, on to full-season A-ball. If not, they stay here for another year. Almost no one moves up during the season as they are very young talent and need to develop and get used to playing pro ball here first. Here is a shot I took of the home clubhouse this morning while getting ready for Opening Day: 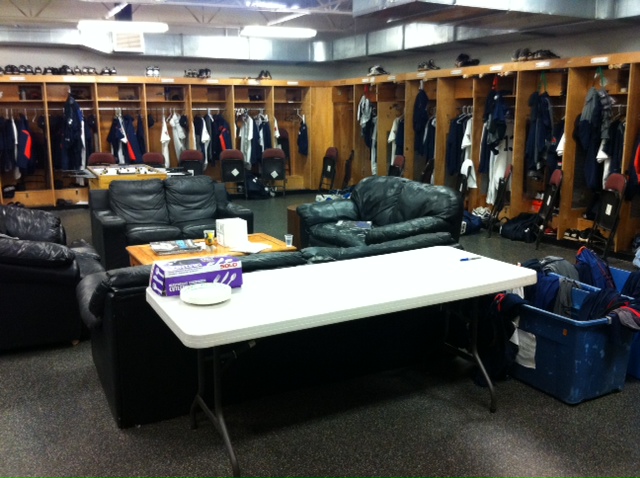 In about an hour from now the team will take batting practice and get ready to play their first professional home game. The stadium looks great, the box office is rocking and I’m excited to have a few thousand fans here tonight enjoying a night of Connecticut Tigers baseball (and of course reading my writing in the Game Day program, while watching the game).

Game time is in four and a half hours and then fireworks afterwards. It’s been a fun two months leading up to the season but tonight it really gets fun. The home team is finally here and we could be watching future major leaguers. Fire up the MLB.TV for my Cubs please. The CT Tigers will be playing on the big field here at the stadium, but my Cubs will be playing on the little screen here in the box office.

One thought on “Home Opener at Dodd Stadium, Tonight!”

You can read articles I've written for Baseball Digest by clicking HERE . Some of them are about various Chicago Cubs, others are about MLB players in general.

Get your popcorn. I'll wait.