I’d like to say thank you to MLBlogs for featuring Prose and Ivy on the MLBlogs home page today.  After participating in the I-70 Baseball Blog Talk Radio podcast, discussing the outlook for the NL Central in 2011 last night, I thought perhaps the increase in traffic that I noticed on my site this morning was based solely on my appearing on that show.

Then, I clicked on the MLBlogs home page and I was pleasantly surprised by this: 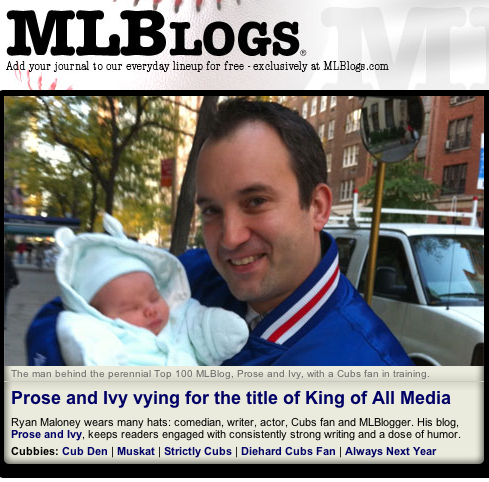 The photo they used is a photo that I included in a post on here called ‘New Beginnings’ back in October or November of last year. If you click on the October and November links for 2010 in the sidebar you’ll be able to find it. The last thing I expected to see when I went to MLBlogs.com today was to see a picture of my son, Rhys and I with Prose and Ivy showcased as their featured site. It’s very cool of Mark and everyone at MLBlogs to take the time to promote the blogs that we all put so much time and effort into as bloggers. I appreciate them bringing my blog to the forefront today and introducing me to new readers, as they do any time they showcase any of our MLBlogs. And honestly, could I ask for a better description? “Vying for the title of King of All Media…keeps readers engaged with consistently strong writing and a dose of humor”. All I can say is I’m glad they enjoy it and I appreciate the encouraging words and support very much!

I really think MLB.com gets it right and does fan relations better than any other league (yes, even if they hadn’t showcased my blog). From the MLBlogs community as a whole, to the blogger features, the recent activity list, the monthly top 50s, the annual top 100, asking bloggers to contribute content to various articles for a byline on MLB.com and the interaction you get from the social media team on sites like Twitter.  The NFL, NBA, NHL and any other sports league trailing behind these guys in fan turnout or even lacking in audience as a whole could learn a lot from Major League Baseball. Thank you to Mark Newman and everyone at MLBlogs.com for helping bring my blog to a wider audience and making my son’s day as well.

Here is a picture of Rhys checking out himself and his Daddy featured on MLBlogs.com today:

Now, something I’ve wanted to share with you for a couple weeks is how I feel that the Cubs organization exemplifies the level of class a team should have in relating to their fan base. I was going to dedicate an entire post to it, but this seemed like a great opportunity.A little while back, about a month or so ago, my son Rhys ended up admitted to the pediatric surgical wing at a hospital in New York City. He had a minor surgery but because he was only seven weeks old and they had to put him under to perform it, it was semi-serious considering that’s always a scary thing to have to do to someone so young. He is fine now and I’m happy to report all is well.

While I post often on this blog about the Cubs and their progression or regression (whichever is appropriate) during the off-season and throughout Spring Training/regular and post-season, I also am very active on Twitter.  Some of you probably follow me and if not, you can at @proseandivy. The Cubs fan community on Twitter is a group of people that I have come to admire and truly enjoy communicating with. It can be about the Cubs, baseball in general, or even the most mundane detail in life or pop-culture as we know it. My tweets are generally full of sarcasm and humor and I find the one-upmanship challenge with other people on there to be entertaining and inspiring. Once you feel you have something that’s funnier than anything else that can be said about something…boom…someone else posts something even funnier. And you try to top them and on and on we go.  Occasionally though, things happen like deaths in the family, scary surgeries or exciting moments like the birth of child. That is when the Twitter community really steps up their game and let’s you know they’re there for you.

When I mentioned that Rhys was having surgery and that I felt no seven week old kid should have to go through this, it was overwhelming the response I received from people on Twitter. The well-wishes and prayers that flooded my timeline meant a lot to me, there the Cubs community on Twitter was again, stepping up when it mattered the most. During this exchange, the Cubs social media team heard about Rhys’ surgery and after sending their best wishes that all turns out well, they took it a step further.

They direct messaged me and said, “Hi. A few of our mutual followers told me about your son’s surgery. Is he a Cubs fan? Perhaps we could send him some stuff to cheer him up.” Well, of course Rhys is a Cubs fan (or as the photo on the home page today put it ‘Cubs fan in training’). That’s all Kevin from the Chicago Cubs’ team needed to hear. He said he’d try to get something out soon.

Once we arrived home from holiday travel, the coolest thing was waiting for us. A box. Addressed to Rhys. Well, Rhys only knows so many people, so who could have sent Rhys mail?  A relative perhaps, sending a gift we didn’t get to exchange in person?

We couldn’t wait to open it. We rushed upstairs to our apartment and immediately opened the box. I’ve included photos below of what they sent to Rhys, items that will forever decorate his room and keep our family talking about for years to come.
Inside the box was: a Zambrano bobblehead doll, a Wrigley Field marquee frame, a light switch plate with the Cubs logo on it and two cool Cubs hats!  So, cool. Once Rhys’ head is big enough, he’ll wear the hats proudly I’m sure and we’ve already been playing with the Zambrano bobblehead.  The switch plate is now on the wall and the frame is waiting for a picture of us at Rhys’ first game.  Here is a photo showing the items included in the package: 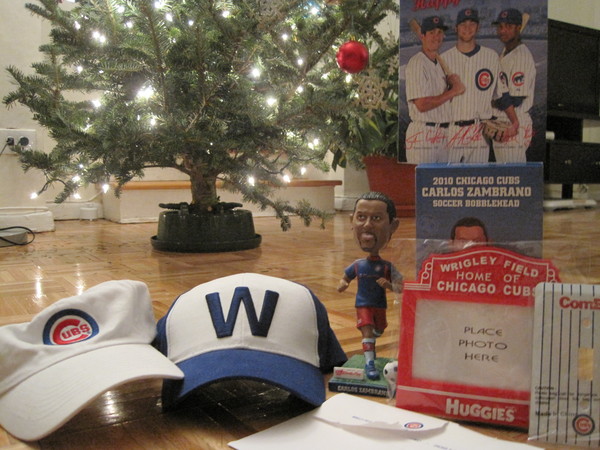 The coolest part however, was the card that was included.
Hand-written, with a picture of the W Flag over Colvin, Cashner and Castro, inside it read:
“Happy Holidays, from your Cubs.  Rhys, We heard about your surgery and thought a few Cubs items would help cheer you up during your recovery. Happy Holidays and feel better! Best, The Chicago Cubs“

The thought that went into the package and the sentiment in going the extra mile for a Cubs fan truly made me respect the organization even more than I already had. I’m already a Cubs fan and of course, Rhys is as well.  But how many kids are lucky enough to have someone with enough class reach out and go the extra mile for them when that person doesn’t even know them?

And how many of those kids have that person reach out to them from their favorite baseball team?

Think about that. Think about the days before social media. What were the odds you’d get to communicate with your favorite ball club, or have the open-door type relationship we have with our favorite teams today. It probably never would have happened in our days as kids and even while it can today, how many teams would take the time to do something so thoughtful? I can’t speak for the other teams, but when it came to the Chicago Cubs…they stepped up and showed nothing but class.

One day, Rhys will truly understand and appreciate what it meant for someone from the Cubs to take the time and try to cheer him up after what was a scary situation for all of us.The Cubs aren’t perfect, nor are their fans and neither groups ever will be.  They will always make decisions that we won’t always agree with and we will always take the good with the bad because that’s part of being a fan. On their side, all they have to do is have enough players on the roster to fill out the jerseys that they sell to their fans and put enough butts in the seats to keep the organization thriving with enough hope in their fans’ hearts to keep them coming back to Wrigley and supporting them on the road for years to come.  What they don’t have to do, is go the extra mile for any of us. They really don’t have to. However, in this case, the Cubs did just that and I really appreciate it.

It says a lot about the team and the league as a whole.I realize the section of the MLBlogs home page where Prose and Ivy was featured is always a segment of the site that features a random MLBlog. However, while they take the time to showcase us bloggers, it’s right to take time and acknowledge that in this aspect of the league/fan relationship, MLB does it right. They do a great job keeping their fans interested, interacting and into their team year in and year out. There will always be something to complain about in life, but sometimes it pays to stop and be grateful for the cool things people do for you when they take the time to do so.

So, thanks again to the MLBlogs team for the plug today and to the Cubs. Once again…total class and thank you.  Go Cubs Go!

9 thoughts on “Thank You to MLBlogs and ‘The Chicago Cubs’”

You can read articles I've written for Baseball Digest by clicking HERE . Some of them are about various Chicago Cubs, others are about MLB players in general.

Get your popcorn. I'll wait.